Fairly Taxing Cannabis Can be a Win-Win for All Parties in Stanislaus County: Cities Would Charge for Application Fees and the County Would Tax

Gross Receipts and Would Share the Revenues with the Cities.

Founder of The Genezen Project

Since the passage of Proposition 64 last November, there has been an ongoing discussion in Stanislaus County about how to best approach cannabis regulation to assure that the interests of the residents of our County are protected. Among the many policy choices facing our Board of Supervisors, and the city councils of Stanislaus County, is how to create a fair tax structure for cannabis businesses that will also be fair to all of our neighbors and residents. In this regard, Supervisor Vito Chiesa is to be commended for his leadership to taking on cannabis business regulation and taxation as his personal mission.

1. Stanislaus County and its incorporated cities should be empowered to charge application, business licensing, and renewal fees proportional to the size of the cannabis businesses. This could include any planning fees associated reviewing applications under a Conditional Use Process (CUP).

2. Stanislaus County should extend a version of the existing excise taxes on cannabis businesses adopted by the voters in Proposition 64, and also apply the

same tax rate used by other counties familiar with cannabis cultivation. To make this all work efficiently, the County tax could be shared proportionately between the county and incorporated cities based upon population.

To share cannabis tax revenue, you would start with the total population of Stanislaus County (around 540,000) and assign a percentage to the nine cities in the County based upon their populations (Ceres, Hughson, Modesto, Newman, Oakdale, Patterson, Riverbank, Turlock and Waterford). The population of incorporated Stanislaus County would also be assigned a percentage. Each incorporated city would receive revenues based upon their population, and the County would retain the rest.

The revenue allocation therefore would be based upon a very fair distribution system so that all of the communities of Stanislaus County, whether incorporated cities or in the unincorporated areas of the County, would benefit equally from cannabis business taxation. This would immediately eliminate concentrations of cannabis businesses based upon tax shopping. A true even playing field would be created.

From an administrative point of view the tax would be easy to collect and allocate. Proposition 64 already provides that the State of California, through the Board of Equalization, will collect the state cannabis taxes. If Stanislaus County's tax simply mirrored a version of the excise tax imposed by Proposition 64, everything would flow smoothly, from revenue collection, to distribution of revenue to communities, to enforcement of track and trace, as well as auditing. All that would be left to the County to do would be to collect an annual cultivation tax based upon the size of cultivation sites.

Beginning in January 2018, the State of California will impose a 15% excise tax on the gross receipts of cannabis businesses, and cultivation tax on all harvested marijuana that enters the market place of $9.25 per dry weight ounce for flowers and $2.75 per dry weight marijuana leaves.

Additionally, other cities in California have already imposed gross receipts taxes ranging from 3% to 18%, with the City of Santa Barbara imposing a 20% gross receipts tax on dispensaries, we suggest that the County investigate how much revenue could be collected and allocated from a County-wide gross receipts tax or sales and use tax on cannabis business retail sales, and a county-wide cultivation tax based upon the Lake and Humboldt Counties models.

This analysis would likely also reveal that a heavy tax burden (similar to the 20% imposed by the City of Santa Barbara) would have the perverse effect of driving down legal sales and promoting an illegal black market in cannabis.

Beginning in January 2018, the state will begin taking applications for commercial cannabis licensing. If -- and only if -- Stanislaus County provides a mechanism for businesses to demonstrate that they are operating in compliance with state and local laws, will Stanislaus County businesses be allowed to apply. The County must act or its operators will be left behind.

Given this reality, policy makers need to move swiftly so that they can allow local taxes to be enacted, and also so that businesses can receive the state licenses they need to operate, and that all our communities in Stanislaus County can fairly receive the tax revenues they deserve. 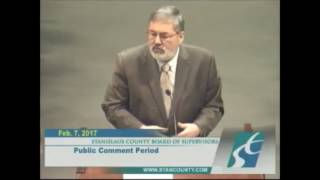